A new era of government services
All over the world, governments are using information and communications technology—or ICT—to provide unprecedented levels of service to their citizens. They are creating public sector aggregation networks that allow agencies to communicate with each other securely. They are spearheading open data initiatives that make their operations more transparent. They are leading the way to the future with large-scale transformation projects like these that are changing lives.

Opportunities exist for stakeholders at every level of government to take the initiative, to build applications or databases, and address the day-to-day issues faced by the public they serve. But the grassroots approach brings its own set of challenges. Schools and universities, hospitals, social services, municipal offices—each government organization has its own IT infrastructure. Development is happening in these isolated IT silos. And that means considerable duplication and waste.

The challenge: there is a need to find ways to consolidate government’s digital assets and maximize common processes, without squelching the grassroots initiative that is doing so much to transform how governments interact with citizens.

G-CEP brings localized computing, storage and network resources to individual departments, while the Government Cloud service provider controls those resources from a central location as a virtually single datacenter. In doing so, G-CEP consolidates the IT silos. And it encourages teams on the ground to create and build services that can be broadly shared, bringing real value to the public.

The different public service organizations benefit from local computing, storage and network resources that live on the premises, bringing very low latency and high service quality to the people these teams serve. G-CEP provides a unified view, controlling these distributed resources from a central location as a single, virtual datacenter.
G-CEP offers more than cloud infrastructure services. It also offers platform services that can be opened to application developers. The developers build and share, with each application and dataset becoming a foundation for the development of more end-user applications. This is called Government as a Platform—or GaaP. 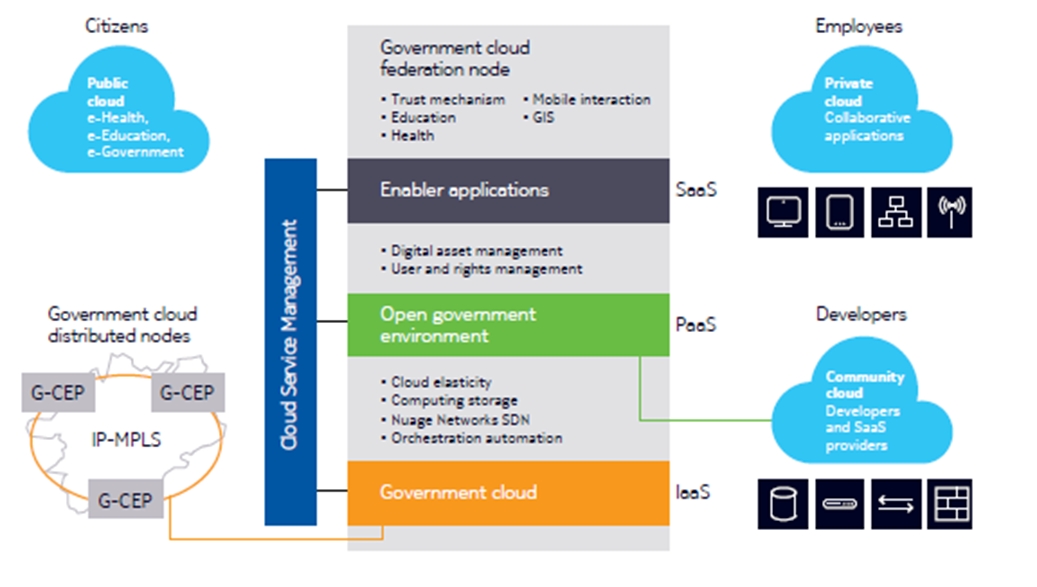