Implications of 5G on Cybersecurity

Telecommunications networks have laid the foundation for the technologies that the world depends on. Owing to their scale and criticality, mobile operators have become a major target for cyber-attacks. The data boom that accompanied 4G created vast amounts of valuable data for the telecommunications industry and the same can be expected at a much larger scale with the proliferation of new technologies like 5G and IoT. Specifically, 5G’s network design brings about a number of upgrades to the network infrastructure that consequently implies network security challenges that require careful and effective mitigation. 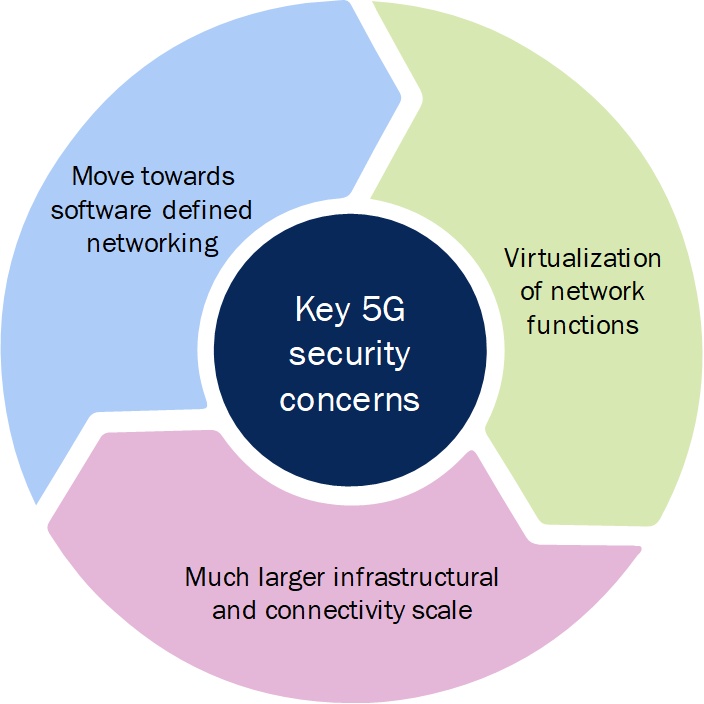 Among the security risks highlighted above, a key risk that needs to be elaborated on is that the distinction between core and edge networks is expected to diminish with the advent of 5G. Due to its network design, sensitive functions that are currently performed in the separated core are expected to gradually move closer to the edge of the network. This is believed to provide ways to circumvent traditional security controls affecting the overall network integrity, availability as well as the confidentiality of customer data.

2. Steps taken by global 5G leaders to address such concerns
In order to address these network security concerns, careful and effective risk mitigation is required. Governments and telecom regulators typically establish regulations on cybersecurity, however, only a handful of countries have taken notice of the increased security requirements of 5G and addressed the security gap. Australia, the United States and Germany are among the countries leading the charge to develop stricter cybersecurity regulations for 5G.

Figure 2: Shift of sensitive functions from the core towards the edge due to 5G [Source: Analysys Mason]

2.1 Australia
Owing to the increased security requirements of 5G, in August 2018, the Australian Government’s Department of Home Affairs released regulations regarding cybersecurity titled ‘Telecommunications Sector Security Reforms’ (TSSR). The key elements of the regulation include:

While 5G and international security concerns might be the catalyst for these requirements, they will be applied across all networks and communications infrastructure moving forward, as well as all vendors. The following security requirements are planned for the telecommunications networks:

2.3 United States of America
In July 2019, the US’ Cybersecurity & Infrastructure Security Agency (CISA) released a Critical Infrastructure Security and Resilience Note pinpointing the security concerns that the agency identifies for 5G. The agency highlighted that the use of 5G components manufactured by untrusted companies could expose US entities to risks especially since the technology will use more components than previous generations of wireless networks.

The report suggested several measures the US Government could take to reduce the risks of deploying a 5G network including:

2.4 Summary of the measures taken
There are several overlapping objectives and procedures that have been observed in the steps taken by the three countries. Each have clearly highlighted the underlying concerns and objectives of the new requirement including consumer protection, business protection and/or national security. Moreover, the areas of focus within these requirements include codes of conduct, monitoring obligations, choice of vendor/supplier, standards of equipment, staff and stakeholder measures and notification requirements.

The figure below highlights the commonalities in the approach taken by Australia, USA and Germany to address 5G cybersecurity concerns.

Figure 3: Measures taken by the three countries for 5G cybersecurity